A NASHVILLE AND DUBLIN LOVE-STORY 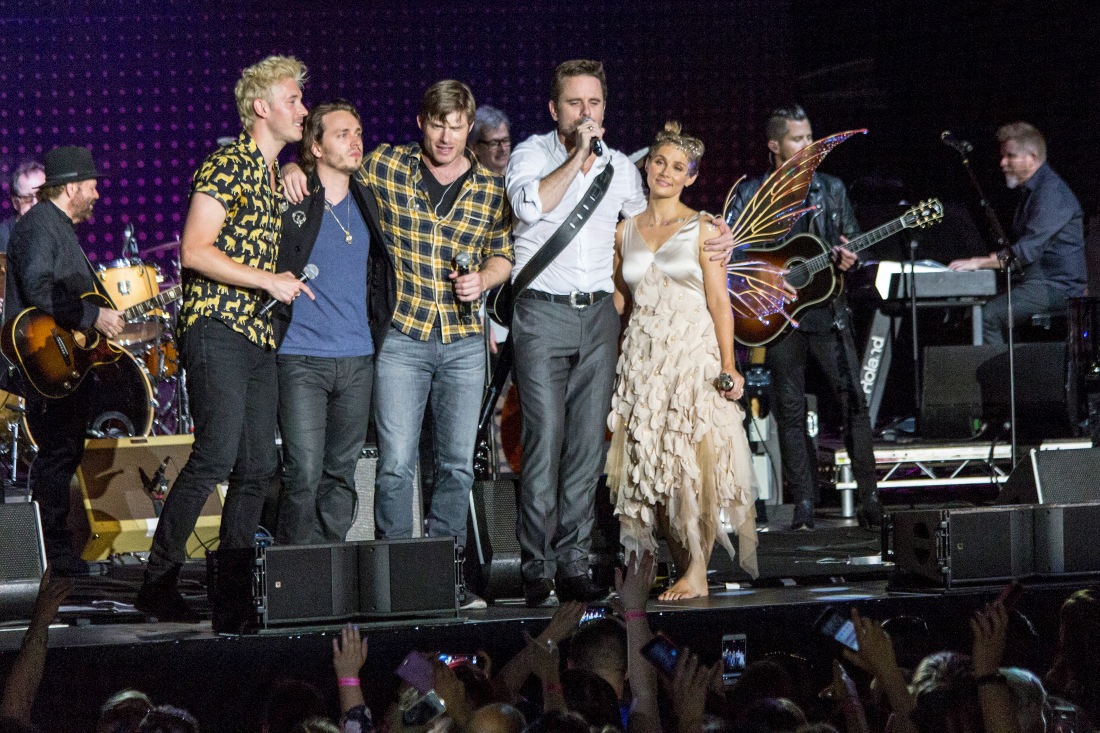 Where does one even attempt to begin when setting out to review the recent Nashville concert in Dublin? That’s the question that’s been troubling me this past week. You see, thinking back on what transpired in the 3Arena on June 19th last, all I can do is smile. And I’ll be damned, but it turns out that too much smiling can be quite the distraction when you’re trying to write!

Let me put it to you guys this way, Nashville in Dublin wasn’t just a concert. To label it as simply that would be doing Charles Esten, Clare Bowen, Sam Palladio, Jonathan Jackson and Chris Carmack, not to mention their magnificent band, a world of injustice. What happened in the 3Arena on June 19th was a love story, a Nashville and Dublin love story.

The first memory to flash back into my mind is also the one that I’ve been sharing with everyone (and by everyone, I mean ANYONE who’ll hear me out) when I’ve been trying to sum up in one image what this remarkable night was like. It’s also the moment that, for me at least, defined the night. Clare Bowen, while singing with Charles Esten, suddenly disappeared off to the side of the stage, only to take everyone by complete surprise by coming back into view as she walked right out into the audience while still singing away! And Charles was doing the same thing on the far side of the Arena at the same time. Nobody expected it, but my word, everybody loved it! Clare shook hands while she walked (still barefoot all the while, as is her preference when she performs), paused for photos, and even hugged people.

But then it happened. And though it didn’t last long, it didn’t need to. The fact that it happened at all was what mattered. Right below where I was seated (although I was standing at this point, as was everyone, to follow Clare’s path), Clare, still singing remember, embraced a fan….and they danced! Right there in the middle of the show, in the middle of a song, in the middle of thousands and thousands of fans, they danced. And we were all that lucky fan for that moment, and it really felt like Clare was dancing with all of us. That’s how close the connection was between Clare and everyone who had come to hear her, and Charles, Sam, Jonathon, and Chris. It was that kind of night in Dublin. Sound crazy? Maybe. But only if you weren’t there.

So here’s the thing, right, I’ve been to a fair few country shows over the years, and to be honest, I can’t remember even one that I haven’t enjoyed. And that’s because first and foremost, I’m a country fan. I go to shows to have a good time. I go wanting the artist to be amazing and to have one of the best nights of their lives so that it’s something special for them, too. I look for and focus on the positives. And when that’s what you look for, and what you focus on, that tends to be what you find. But for the life of me, I can’t remember ever knowing a show as spectacularly wonderful as this one before. In fact, I’ll go further, and this should offer some kind of clearer context for what I’m saying. I can honestly say that not since Garth Brooks played Croke Park back in 1997 have I ever experienced the kind of feelings I did at the Nashville concert in Dublin. And Garth was a God in Dublin that night! And still is to me, and to millions of country music fans.

At most shows, the audience is made up of fans who are there because they know the artist and like their music. And so, naturally, you can really feel the appreciation for the artist’s ‘live’ performance as a result. But this, THIS was something else altogether. This, like Garth twenty summers ago, was sheer love flowing towards the stage from every heart in the crowd, from when the first chord was played until the last note faded. When Charles Esten, in an Elvis-mania like moment, brought the roof down simply by walking out on stage, without even saying a word – or needing to – but just flashing that smile and with a wave of his hand, well, the scene was set! And I don’t think many would disagree with me when I say that love flowed right back out into the audience as well. Irish audiences have a reputation for not holding back in their praise and warmth, so if it’s on display, it’s because we’re feelin’ it. It’s not the kind of thing we fake just for the sake of being nice. Not that we’re mean just for the sake of it, either. My point is, that when we cheer you on, and roar for more, and stomp our feet, and sing-a-long, it’s real. And thousands of us cheered on Charles, Clare, Sam, Jonathan, and Chris, and thousands of us roared for more, and we stomped our feet, and we sang along. And it was real, and it was love. And it was love both ways, being given, and being given back.

I’ve been a fan of the Nashville tv show right from the get-go, and with all ten volumes of the show’s soundtracks to date in my collection at home (and a boxset, because you always need to have the boxsets, too!), the ‘live’ concert was a night I’d been excited about ever since the date was announced. I think it’s safe to say that the show has surprised, if not confounded, many potential critics in that its music has been every bit as impressive and outstanding as its acting and storylines. Where it may have been feared, possibly expected in some quarters, that one might have let down the other, thus reducing the whole, such worries have proved to be unfounded and unwarranted. In fact, the show has managed to seamlessly conjoin its dramatic and musical elements. And that’s something which shouldn’t be taken for granted, shouldn’t be overlooked, and for which great credit is due to all concerned, most notably the show’s Academy Award winning writer Callie Khouri, and executive music producers T Bone Burnett, Buddy Miller, and most recently, Tim Lauer.

So, I had no doubts that a great night lay in wait. But what I could never have imagined is just how much the concert was going to exceed my expectations. For that, my friends, it most certainly did. Fans of the show will already be well aware of how supremely talented Charles (Deacon Claybourne), Clare (Scarlett O’ Connor), Sam (Gunnar Scott), Jonathan (Avery Barkley), and Chris (Will Lexington) are as far as acting goes. And we know they can sing, too, of course. Because they sing in the show. But let me tell you, NOTHING, and I mean NOTHING, can prepare you for seeing with your own eyes and hearing with your own ears, and yes, feeling it with your own heart, just how damn good these guys are when they sing and perform ‘live’.

I could have gone for a song-by-song review of the night’s set, but there’d have been little to be gained from that approach. Every song was brilliant, absolutely top class. The standard was impeccable in every way, and I for one was awestruck by the night’s end. This was a show of one beautiful moment after another. You can see from some of the images so fabulously captured by my buddy Ken Cassidy, from the expressions on the faces of Charles and Clare and everybody else, that they had fun in Dublin, too.

Standout moments for me? So many to choose from! First of all, Clare coming into the audience and dancing with a fan while still singing. The reception Charles got when he walked out on stage to get the show underway. Jonathan Jackson’s spine-tingling rendition of ‘Love Rescue Me’, and ‘Unchained Melody’, dedicated to his wife, who was in the audience, and with the whole of the 3Arena on backing vocals. Chris Carmack playing the blues, and then the saxaphone! Sam Palladio’s gorgeous duet with Una Healy for ‘Stay My Love’, and then ripping up the drums later on! Clare again, sitting on the edge of the stage, wearing her wings, backed only by guitar (I was so lost in the moment, I can’t recall the song), and not a single other sound to be heard while she sang, just total silence and respect from the thousands in attendance. And Clare singing with her husband Brandon. And the group finale of ‘Danny Boy’…, perfect. It was love all round in Dublin.

This was a Nashville and Dublin love story, and I can see it being a lifetime long affair.

~ Nashville is broadcast in a remarkable 225 territories worldwide. Soundtrack album sales have topped a million, as have sales of single tracks to date.