“COUNTRY’S COMIN’ BACK TO THE FAITHFUL!” 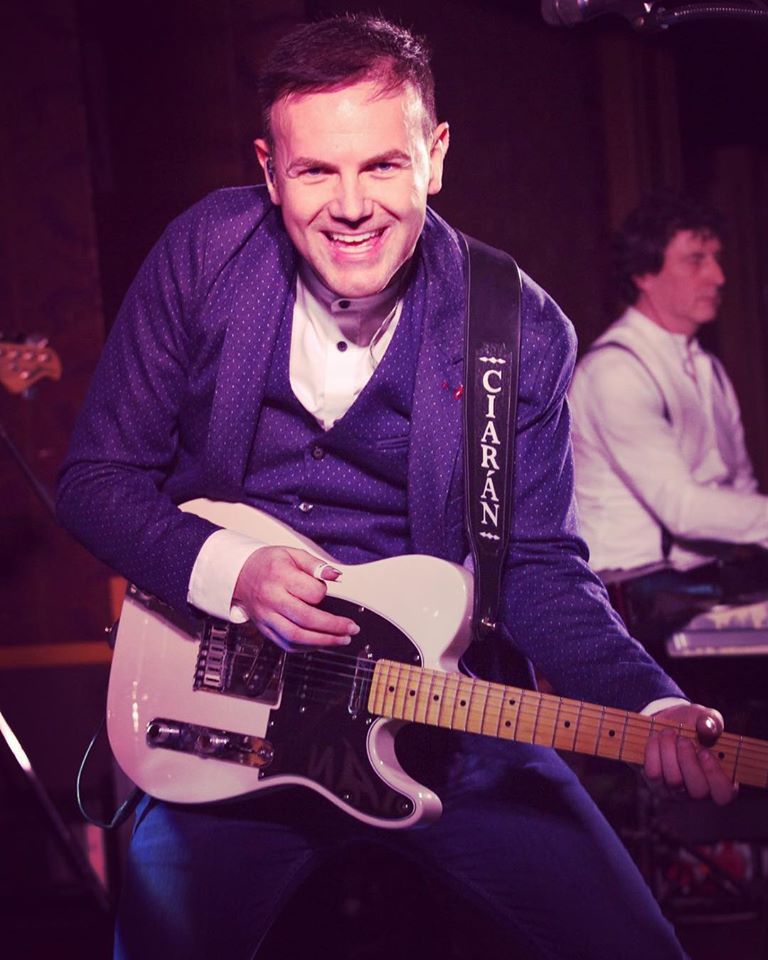 Ask me to name one of the true gentlemen of the Irish country music scene, and the name of Ciarán Rosney will be one of the first out of my mouth, every time. Ask me to name the best guitarist in Irish country music, and Ciarán‘s name will be THE very first name you hear, every time. The Offaly man’s career has been on a steadily upwards trajectory over the last few years, to the point where he’s collecting awards, has his own band on the road, and this year, he’s even one of the mentors on TG4’s annual Search For A Country Star, Glór Tire.

Catching up with Ciarán is always a pleasure, but since he’s put down roots in Monaghan, and with the notion of blank dates in his diary increasingly becoming a rarity, that’s not nearly as often as we’d like it to be. However, we did manage to reconnect for a little while a couple of weeks back to have a chat about everything that’s been happening for the Willie’s Shoes hitman. Beginning with Glór Tire, I asked Ciarán how he ended up in the position of being mentor to Ailish McBride this season?

“I just met Ailish fairly recently and had a listen to some of her stuff. I mean, she’s already a presenter [Ailish’s Country Mix] on the Keep It Country channel, so I was already familiar with her from there. Then I looked at a few of her videos, and little things like that. She has a nice way about her. Ailish came to one of our gigs in the Ryandale, in the Moy in Tyrone, and we got to know each other from there really. And there’s something unique about her. And that’s how she became the contestant for this year. So far, she’s goin’ really well, I’m happy for her.”

Everyone who has heard Ailish sing knows how talented she is in the regard. But what’s Ailish like as a person? What has Ciaran seen that impresses him on that side of things?

“Well, I think she’s a nice person, first of all. And I think she’s passionate about country music, which is so important. She’s a very easy person to work with, too, which is also very important. She’s open to suggestions, she’s open to maybe changing things if they might need to be. And that’s important, that you’re not stuck in your own way of goin’ on with things. But mainly, Ailish has a very good idea of country music herself. And obviously if you have a natural feel for it, and a natural flair for what’s good, and what sounds good, that’s important. Ailish is very comfortable in her own skin. Country music is not alien to her, it’s very much part of who she is. And I kind of gathered that from her from the very start. She wasn’t just someone that was singing country music for the sake of it. She’s a country girl, she was born in the country, grew up on a farm in Donegal, and she’s very passionate about the country way of life, which is as important as the music itself, ya know.”

Glór Tire is very much a team effort between each mentor and their contestant. So how has Ciarán been finding his new role?

“It’s great, actually. I suppose the fact that I spent so many years teaching music can stand to me, maybe, teaching in the different universities and the music degree course and stuff. That definitely helps me because I feel I can give Ailish some advice that way. And maybe I have friends who can help her as well, people I’ve got to know over the years, who can help guide her in the right direction with me. And I’m enjoying it, I have to say. It’s a great experience and a great opportunity for me and my band, too, because we’ll get to sing and play a few songs ‘live’ on TV, which is so important. And the whole production around Glór Tire is fantastic, they do a really great job there. They’re so professional in their approach to everything.”

If you haven’t heard Golden Ring, the wonderful duet from Ciarán and Ailish, on the radio by now, the first thing you need to do tonight is request it from Joe Cooney on Country Roads! I think Joe would agree with me in saying this is simply a superb version of a great country classic. What I wanted to know from Ciarán, was how he and Ailish came to chose that particular tune to record?

“It’s funny, Ailish was actually the one who suggested that song. I liked it already, so I said yeah, let’s do it. It was for the show originally, but our voices worked so well together, that we decided to record it. I met Ailish one night in Donegal town, we were playing a show there, and Ailish came along just so we could practise the duet, ya know. But as soon as we played it once, it was almost perfect straight away. George Jones and Tammy Wynette did the original recording, of course. And bot of those singers kind of suit our voices, too, the key, and the range, that kind of thing. We got a super response when we recorded it on Glór Tire for the show. Some of the audience that night were saying to us how well it had sounded, and that we should record it, so I suppose that’s kind of why we did.”

There’s a big Offaly connection to this year’s series of Glór Tire, with John Molloy and Noreen Rabbette featuring as two of the six contestants, being mentored by Michael English and Mike Denver respectively (and we’ll be chatting to Noreen in next week’s ‘On The Right TRAX’). With Ciarán as mentor to Ailish, that means Offaly has a vested interest in 50% of the acts taking part!

“Yeah, you have to say Offaly is really coming back to its own in country music now. And of course there’s Olivia Douglas as well right now, from Ferbane. We’re starting to bring country back home again, following in the footsteps of John Hogan and times when John was right up there at the very top, when he was kind of the same then as what Nathan Carter is now. It’s great to see it coming back to the Faithful County. It’s very much a rural thing, country music. And Offaly is very much a rural country, one that’s always had a strong tradition of country music. So I’m happy that there’s so many good country singers coming to the fore again from the county.”

It feels like only a few short years ago that Ciarán and I were sitting chatting in the Court Hotel as he set out on the early days of his own career. And yet, here we were, just a few years down the line, with a couple of outstanding albums to his name, his first awards on the mantlepiece at home, his own band on the road, and now being asked to mentor someone on Glór Tire. Has he been enjoying the journey?

“Yeah, look, it’s been fantastic. I mean, the music business is a tough one, there’s no doubt about it. Anything in the arts is. There’s such great highs, but then there’s such great lows, too. Things can be very hard at times, then things can be unbelievably great. It’s about being able to handle all that, and to battle on to the next day, and then move on again, so that there’s always forward movement. That’s the biggest challenge. But I’ve always loved playing country music, and I’ve always loved the challenge of the next gig, or recording, or whatever it is. I’ve always loved that. All my life, I have. And setting up the band, that was a whole challenge in itself. Ya know, you’re playing with five other people, you have managers, you have people helping you on the road, there’s all kinds of things. I can’t say it’s been all great, because it’s been very, very tough. It takes a lot of work. I work basically every day of the week. I’m very lucky that I have such a great family. I have a super wife, a super mam and dad, and a super mother-in-law, as well. And without all of that help, I couldn’t do what I’m doing, to be honest, I just couldn’t. It would be impossible. You need that moral support there, that helping hand when you’re feeling down. Someone to say, hey, tonight wasn’t too bad at all, was it, ya know. Little things, like your own text message about the new single, saying it’s a great one, they all give you a boost to go onto the next thing you’re planning.”

At the time of our chat, Ciarán‘s version of Marie’s Wedding was proving to be a huge favourite with fans at his shows, and indeed with country radio as well…

“It has, and you know it’s funny actually, because there’s a great Offaly connection to that song. When I was going for lessons with Michael Moore there in Tullamore – Michael thought me piano from the age of nine – and I remember at one point early on I wanted Michael to give me some advice on singing. And the very first song he brought out to show me was ‘Marie’s Wedding’! And that was way back now. I sent him a copy of the single when I released it, because I referenced him on it, thanking him for it. So one of the first songs I ever learned properly was ‘Marie’s Wedding.’ But I never did it at a gig, ya know, I never sang it. It was only recently I thought about it, and how great a song it is, and I said we could do a really great dance version of it. So we did. And actually, my fiddle player, Denise, from Donegal, who’s a super, super musician, she gave me the idea of putting the reel at the end – ‘A Pinch of Snuff’, it’s called – to give it a really good lift at the finish.”

Ciarán had already said around the time that Marie’s Wedding was released that it would feature on his new album. So how was work going on that project?

“We’re well underway on it, probably seventy-five per-cent of the way. So the bones of the whole thing is there. I don’t want to rush it, though, I want to make sure that every track is right. I’m very fussy about every track [laughs]. For me, every track could be a single! There’ll be three of my own songs on it, and obviously all of the singles we’ve brought out as well, like ‘Found’ and ‘Hold What You Got’, and ‘Remember Who You Are.’ We’re recording with Jonathan Owens in Granard, he’s got a really great feel for country music, and a great studio there. I’m very happy with the way it’s coming out. So I’d say before the middle of the year we should have the album. But there’ll be another single out before that, maybe in March or somewhere around then.”