CLIONA IS A PERFECT TEN! 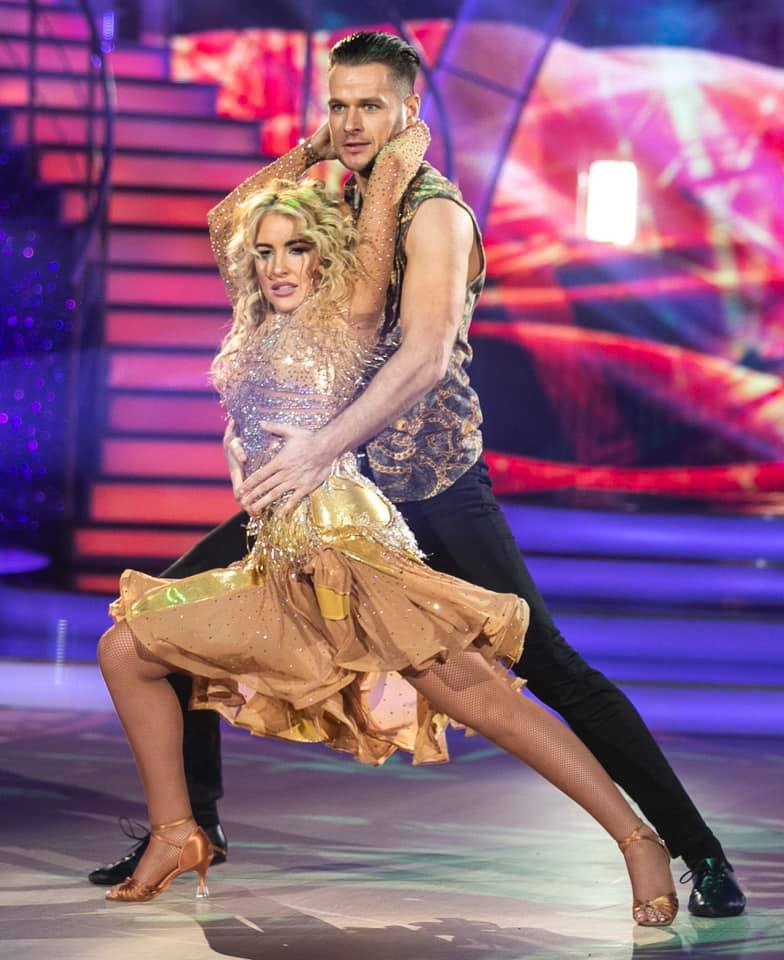 Country music star Cliona Hagan is one of the leading contenders to take home the Glitterball Trophy on this year’s series of R.T.E’s Dancing With The Stars. And as she showed last Sunday night, when her performance earned her the first TEN of the season from judge Julian Benson, Cliona is flying the country flag high and proud. The Tyrone native will be hitting the midlands later this summer when she takes to the stage as one of the stars of the Ballymore Country Music Festival. But earlier this week – the morning after the night before, in fact – we had a chance to chat with the country queen herself. And with a night before like Cliona had just been through, there was really only one place we could begin!

I asked Cliona if she knew while she was dancing, or when her and her switch-up week partner Vitali had finished, just how good their routine had been?

“There’s certain parts of the dance that during rehearsals I wasn’t getting. So I was so happy when we finished the samba, because I knew I’d got it! I’d got those parts right, so I was really, really happy. But I didn’t know, obviously, how it looked. But I felt happy that I’d got those parts that had been messing me up and throwing me during rehearsals. I was delighted that I remembered everything! [laughs]. And then I was gobsmacked when Julian gave me the ten! And it was the first ten of the series, too, which was really cool. I was delighted!”

I wondered if Cliona felt under a little bit more pressure this week because she wasn’t dancing with her regular pro partner, Robert? Or did that actually take some of the pressure off, to a certain extent?

“I think switch-up week is such a fantastic idea, because it takes everyone out of their comfort zones again, being with a new teacher. And obviously every dance teacher has their own way of teaching. I’m really appreciative of the fact that not only have I got to dance with one pro, but with two. And I have to say, it opens your eyes. I had a fantastic week with Vitali and he really pushed me to my fullest potential. And Robert, when he saw the dance, he said to me, ‘I’m so proud of you, Cliona, you’ve obviously worked so hard.’ Because the samba Vitali put together was a very difficult one, with a lot of steps in it. Robert was very proud of me for getting all those steps within just the four days. So yeah, I really did enjoy switch-up week, and I loved the song as well. The samba is definitely my favourite dance so far! [laughs].”

Despite scoring a magnificent ten on Sunday night, and making every dance look effortless so far, Cliona had no dance experience before the show. And she’s very honest in admitting that she finds learning the routines extremely difficult, but very enjoyable…

“Yeah, well at the end of the day, if you don’t put the work in, you’re not going to see the results. And I’ve been working my backside off! But it was so rewarding last night that all of those hours we put in, and even the attention to detail…because there’s some steps, even simple steps, that really, really throw me and I get so frustrated. I have a wee bit of O.C.D., and I need to go over these things a million times! [laughs]. But I have to say, I love the dancing. It reminds me a bit of the singing in that you have to get into character. I didn’t realise how emotional dancing is! So I really love trying to embody each character that you play for each song, and each dance. The whole production values as well, within Dancing With The Stars, you saw me last night, they basically had me in the Sahara desert! [laughs]. Visually, it’s unbelievable, so I just want to make it look good too by not messing up my steps! [laughs]. I’m having an amazing time.”

Of course in order to take part in D.W.T.S., Cliona has had to put her singing career on hold for the time being. And don’t forget that Cliona loves singing so much, that she put her teaching career on hold!

“Yeah, I’m missing being able to gig, I really am. As you touched on there, I was a teacher beforehand, and it was a really big deal to walk away from a guaranteed, paid job. Especially when you’ve got bills to pay, and a lovely student loan as well! [laughs]. So it wasn’t an easy decision to go into the singing. But in my case, that’s what I love to do, to be on the stage, to sing. So to leave it for a while to go on this, well, you know what, I like to push myself and try new things. And it’s great for me to, I suppose, to be a female representing the Irish country music scene, which unfortunately is not really so well known in the city. But it’s a genre I’m delighted to be a part of, and I’m really proud of.”

Does Cliona feel like it’s a bit of a weight on her shoulders, perhaps, the fact that she is seen as representing Irish country music? Or is it helping to drive her on more than anything?

“It’s driving me on even more. I want to show people out there what amazing music is on their doorsteps. And not only that, I want to show young girls that females can get into the scene as well. There’s not just male country singers.”

D.W.T.S. runs until March 24th, and please God and fingers crossed, Cliona will be involved right up until the last dance of the series. After that, she’s back on the road with a brand new band and her ‘Dance On’ Tour…

“Yeah, brand new band, relaunching on Easter Saturday in The Ryandale, Tyrone. New band, new signs, new material, completely different show. I can’t wait to show everyone what we’ve been working on. You’d never know, I could be tangoing and foxtrotting around the stage! [laughs]. I’ll be doin’ all my old songs as well as some new ones, and some covers in there, too. I’m looking forward to coming back for my concert tour as well. It’s going to be full-on. But I’m just taking every day as it comes and soaking up every moment of this dancing, because not everyone gets to dance with such pros. I LOVE tryin’ new things. So I’m just gonna keep goin’. And that’s the thing for 2019, I just want to try new things and not be afraid to challenge myself, and not be afraid to fall flat on my face, quite literally! [laughs]”

Cliona, a country girl by birth being a native of Tyrone, has relocated to Dublin for the duration of her time on the show. Now, on the one hand, Dublin is probably a lovely change of pace. But on the other, Dublin is a BIG change, full-stop. How is Cliona adapting to life amid the bright lights of the city?

“I absolutely love Dublin! I’m from Tyrone, obviously, and during the week there is NOTHING happening! It’s very, very quiet [laughs]. I didn’t realise there’s a whole world goin’ on down here. I would work at the weekend, of course, and sometimes during the week as well. Dublin is such an amazing place to be, and there’s so much to do, a lot of opportunities. I really love it here. I could see myself actually livin’ here for a few years, truth be told. So I’ll see whether I’ll relocate here for the next while or not. But I’ll still miss the peace and tranquility of home, and the countryside, don’t get me wrong. But again, it’s good to change things up once in a while!”

Do the contestants on the show get to mix much during the week, I wondered? Or are they all so busy rehearsing that the only time they see each other is for the group rehearsals and then the ‘live’ shows?

“Well, I live with Demi Issac, so I do, so I see Demi all the time. We all, the majority of us, rehearse in the Liffey Studios, and there’s a communal area there. So we always pop in and see how each other is doing. Everybody’s really lovely and we all get on so, so well. And it’s good to be able to chat to the other contestants who are in the same boat as myself! It’s like learning a new language, so it is!”

So when it comes to Cliona‘s fellow contestants, is there someone who is the joker of the group, and someone else who is almost a father-figure or mother-figure to everybody else?

“Oh yes! The joker of the group, one-million per-cent, is Johnny Ward! Oh my God, you should hear him imitating my Tyrone accent! He can imitate everyone’s personality. If you’re having a bad day, he always lights up the room and puts a smile back on your face, he makes everyone happy. And he’s definitely the joker of the group [laughs]. I’d say Eilish, who has left, she’s definitely have been the mother-figure. Herself and Holly were back at the weekend, it was great. Demi is like the little sister of the group. Peter Stringer, he’s just a gentleman, so he is. Denis is too. And Fred is a big teddy bear you just want to cuddle! He wouldn’t hurt a fly. And Mairead is the wee mummy of the group now. And Clelia is just like a big older sister!”

And what about Cliona herself? What role does she play in the group dynamic?

“Me?! Oh! Do you know what, I’m actually sitting beside Demi and Robert here, let me ask them [laughs]. Demi is like, ‘Where to begin!!!’ [laughs]. She said I’m the miniature Dolly Parton of the group! [laughs].”